You are here: Home / Reviews / Grand Teton and Yellowstone | BEST ONE DAY TOUR

Our tour of the Grand Teton and Yellowstone National Parks was a part of the Wildlife Expeditions component of the school.   All of the tour guides are bonafide Biologists who not only led you to the spots that made both parks famous, but taught you so many great details that you actually felt as though you were on the most inspiring field trip ever.

The full-day tour began barely at the crack of dawn and ended around sunset.  We boarded a large safari styled four runners with roof hatches for easier viewing.  Mark, our guide, was friendly and a little too chipper for that hour of the morning.  However, his enthusiasm was instrumental in snapping me out of my stupor.  That and the lovely thermos of coffee that he had on hand for tourists who refused to go to bed on time the night before.

At noon, we had made our way through the Grand Teton and Mark stopped at a lovely scenic spot.  There he set up a tasty picnic lunch for us to devour.  An hour later, we got to spend the bulk of our time in Yellowstone where we learned about the history and mystery surrounding it. 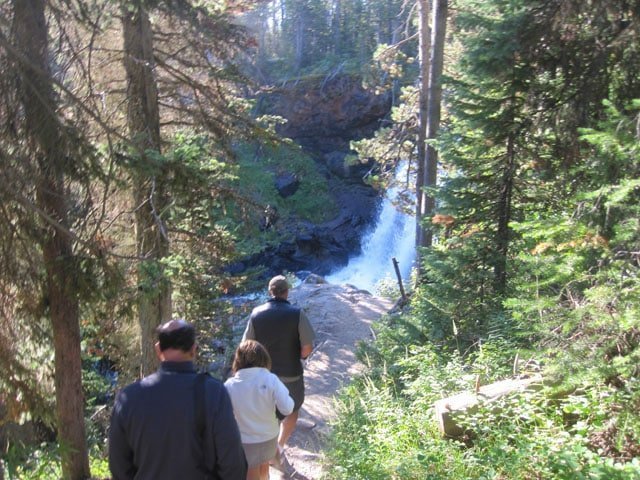 Our guide, Mark leading us to the first waterfall in Yellowstone

During westward expansion, the government decided to protect and not allow development in the region now known as the Grand Teton and Yellowstone.  At first, it was scoffed at because there was literally land as far as the eye could see.  So what was the point because the land was inexhaustible?

It worked out well because the idea of having a protected area that everyone could enjoy was a good one.  Thus, the first National Park in the world was established.

Yellowstone is one of the largest active volcanoes in the world.  It has over ¾ of the world’s hydrothermal features.  There are over 10k that lie within the boundaries of Yellowstone, the second largest number is in Iceland which only has about 900: 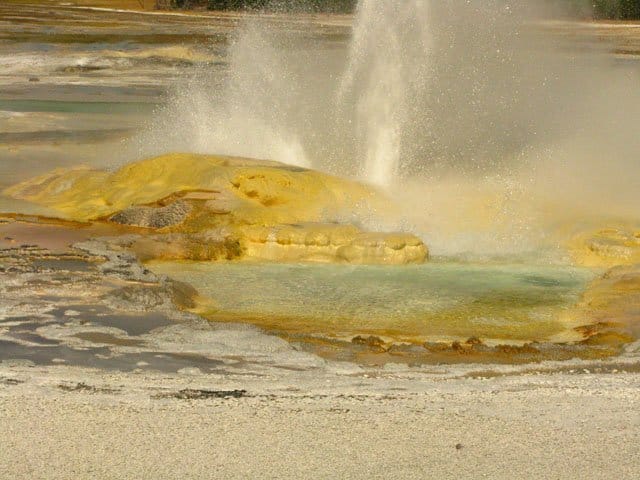 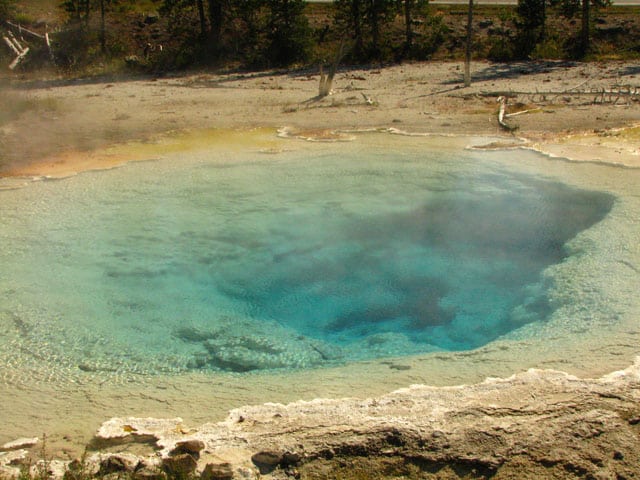 The Morning Glory Pool at Yellowstone

boiling water pooled on the surface. 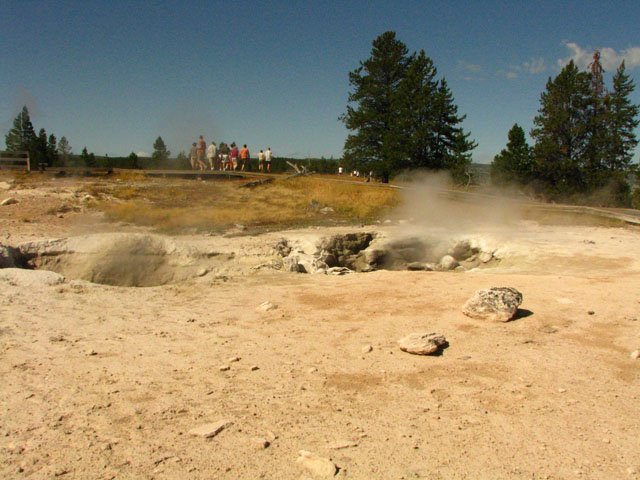 Fumeroles billowing to the surface

are steam vents blasting from the underground. 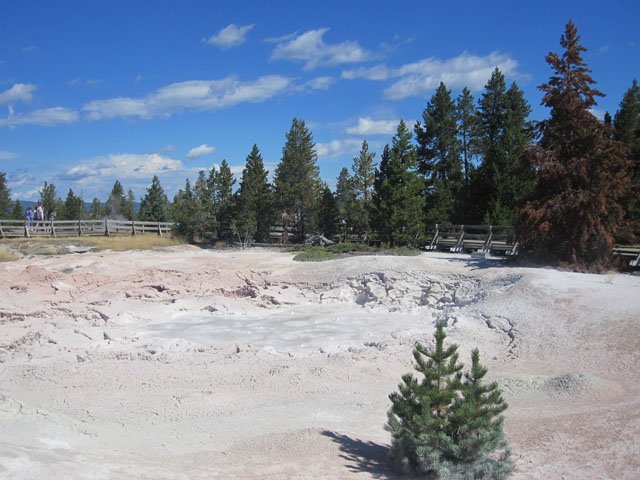 are where the mud is actually boiling.

When early explorers came and noticed all of these hydrothermal features, their only explanation was that there had to be a volcano nearby.  Of course, there was no evidence of a cone-shaped, above the ground volcano.   It wasn’t until satellite imagery was invented that they could see volcanoes close to the earth’s crust.

The explorers had no idea that they were standing in the middle of the volcano. When a volcano erupts, it spews out molten rock from the earth’s core.  After it’s finished erupting, the space that the rock once occupied is now vacant and over time, the crater walls of the volcano will collapse in on itself.

Yellowstone is a Geological Wonder

Historically, there have been 5 major eruptions at Yellowstone.  One happens about every 600k years and the last time was 640k years ago.  So we are way overdue for an eruption but that’s from a geologic standpoint where timetables are much different from ours.  It’s thought that a massive earthquake will take place before an eruption.

There’s an average of 6-8 earthquakes that occur daily at Yellowstone.  People aren’t aware of the seismic activity which ranges from 1-2 on the Richter scale and aren’t really large enough to notice.  Yellowstone is constantly monitored so all activity is easily measured by scientists.

The hydro-thermal features act like pressure releasers.  In 1959, there was a 7.2 magnitude quake right outside the western boundary of Yellowstone.  It affected the Teutonic plates underneath the pressure releasers, the hydrothermal activity, and its plumbing structures.  As a result, some geysers stopped erupting and formerly grassy areas suddenly began to spew steam.

Three features that we focused on in Yellowstone: 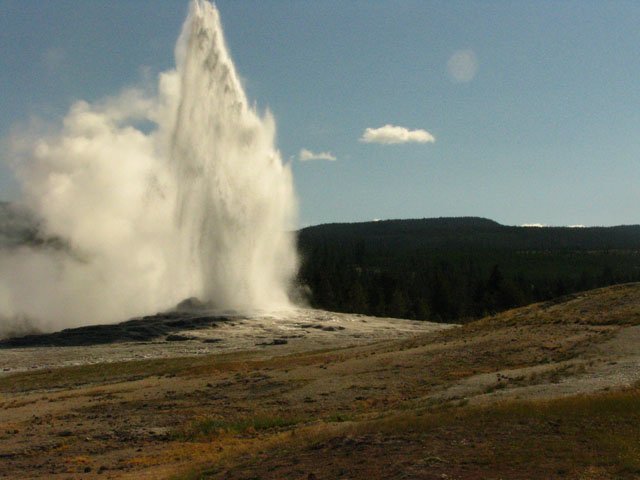 Old Faithful Geyser in the middle of showing off

which not surprisingly, gets the most press. 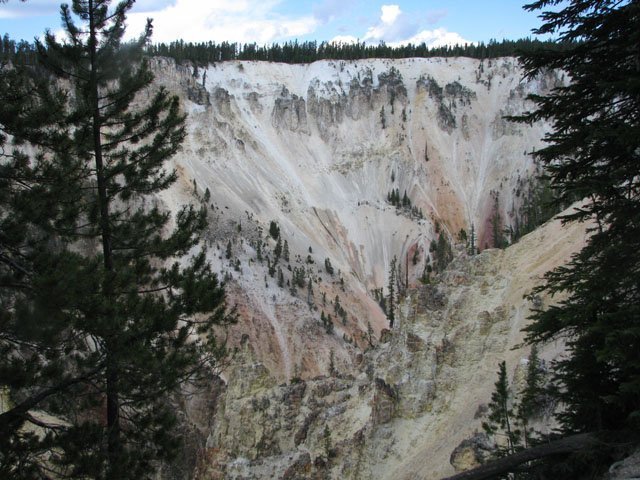 The magical, pastel wonder of Artists Point at the Grand Canyon of Yellowstone River

The Grand Canyon of Yellowstone –

has a 300 ft waterfall over the canyon; neither are discussed that much in the press. 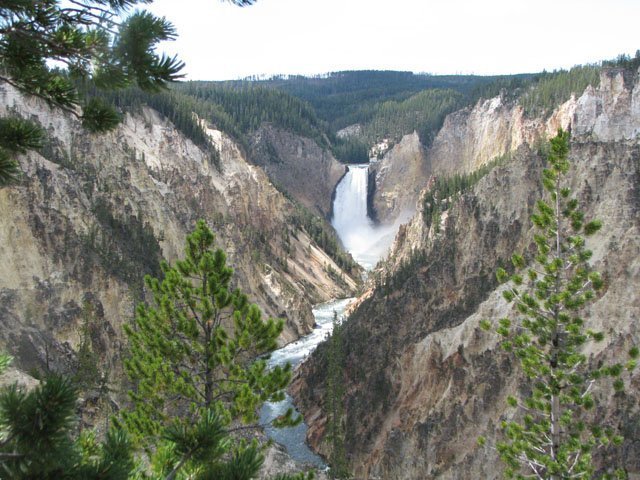 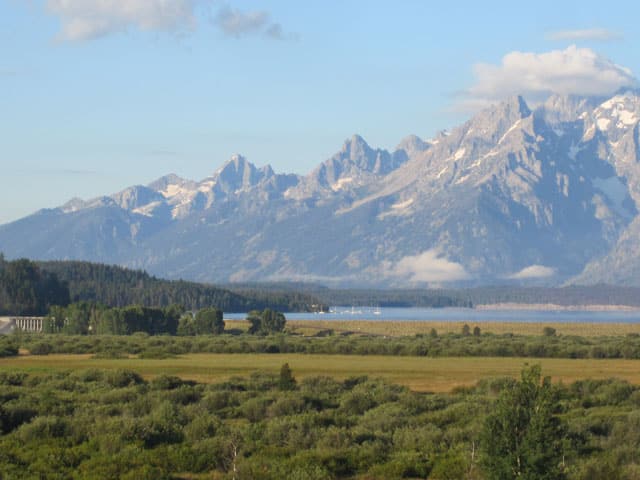 is the largest lake in North America; above 7k ft in elevation.  There are no boat size limitations on this lake and it is completely surrounded by 15.3 square miles of wilderness and freezes over in the winter. 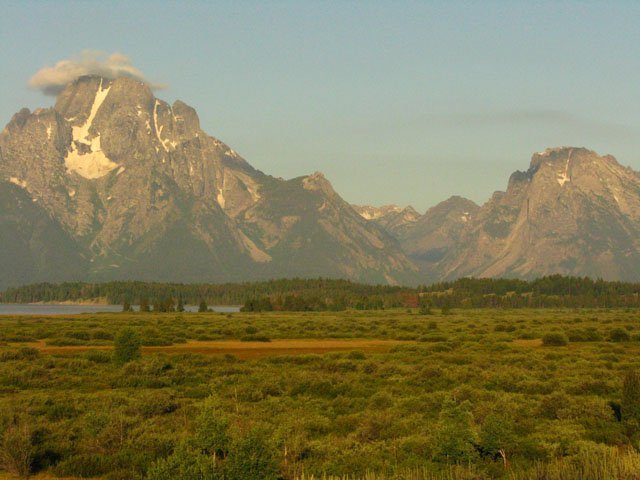 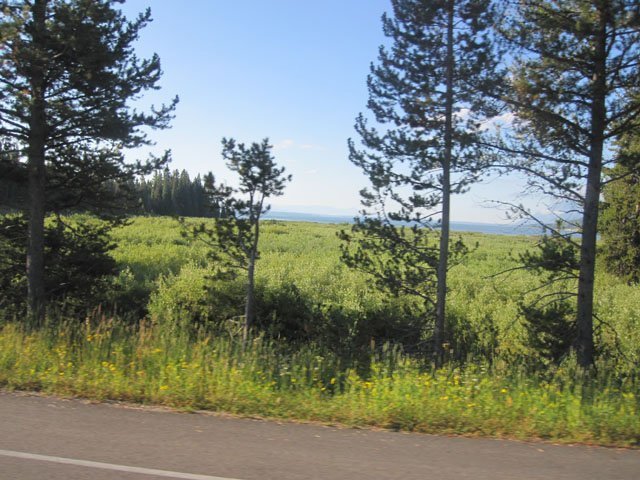 Six mile stretch of road between the Grand Teton and Yellowstone

Therefore, hunters can actually use that 6-mile stretch to hunt.  However, they are forbidden to hunt inside the boundaries of the Grand Teton or Yellowstone Parks.  During the hunting season, this forest is flooded with hunters who are attempting to get elk, moose or deer as they migrate from one park to the next during the winter. 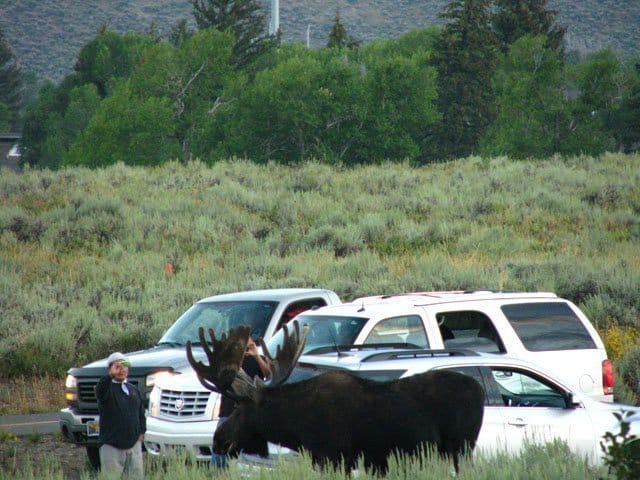 People getting way too close to the moose at Grand Teton

As long as they do not cross into National Park territory, it’s all legal.  However, it does affect the bloodline of the Elk over time if the best and strongest are brought down by the hunters.

What are the Teton Science Schools?

We were fortunate to be the guest of the Teton Science Schools which has two campuses in the Grand Teton National Park and in the city of Jackson Hole, Wyoming. They’re the ones that everyone learns about in school but nothing prepares you for what you actually witness up close and personal. The school’s mission is to educate about natural resource sustainability and conservation and they offer six innovative programs to do that:

Full Disclosure:  I was a guest of the Teton Science Schools which is a private, 501(c)(3) non-profit educational organization, operating year-round in Jackson Hole, Wyoming in partnership with Grand Teton National Park and as a permittee of the Bridger-Teton National Forest and the Caribou-Targhee National Forest. Please contact them at 700 Coyote Canyon Road | Jackson, Wyoming 83001 | Ph. 307.733.1313 | Fax 307.733.7560 | email: [email protected]

Previous Post: « Alaska Cruise From Seattle Booked? Check out the Port Valet Program!
Next Post: What is a City Pass? [THE NEWBIE’S GUIDE] »