In search of the great Paladar

One of the lovely aspects of Havana is that most of the restaurants are privately owned concerns operated by Cuban families and are better known as “Paladars”.  We’d heard that La Rosa Negra Restaurant was one such paladar that should not be missed.

In the states, we are usually stuck with a series of branded restaurants that consistently sell uninspiring dishes to the masses and we have learned to accept our fate.  Sure, there are a few innovative mom and pop restaurants sprinkled here and there. But eventually, they seem to fall in line with a concept and stray from their original purpose.

It’s an easy walking distance in the Vedado neighborhood

As it turned out, La Rosa Negra Restaurant was a 10-minute walk from our apartment.  However, our lovely apartment manager, Raul drove us there instead.  The paladar is relatively unassuming.  In a prior life, it may have been a basement or garage because you had to walk down what looked like a driveway underneath a house.

On either side of the driveway, there were beautiful stone benches installed to accommodate guests who were waiting their turn to be called.    A large palm that was planted off-center, provided shade during the day and privacy for diners at night as the restaurant was very well lit. 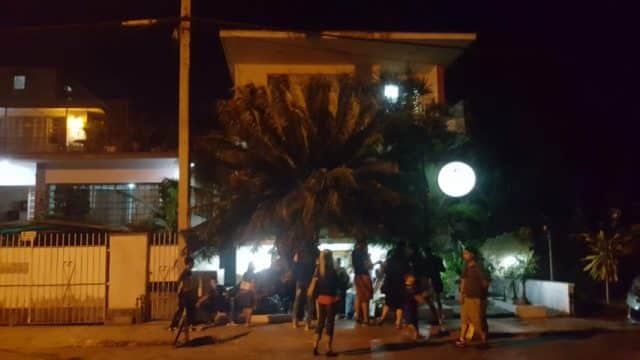 It was so good, we visited twice!

We managed to visit La Rosa Negra Restaurant twice during our trip to Havana.  The first night was on a Tuesday and the foot traffic was very light,  we walked right in and were seated.

Our Saturday visit (see photo above) was the opposite experience because we had to make use of those beautiful benches by waiting 30 minutes for a table.  Be sure to visit during the week, if you can.

The all-male waitstaff was very polite, well-dressed in their black slacks, white long-sleeved shirts with black bow ties.  A solid black apron adorned their waist as they walked proudly with white napkins folded over their forearm.

Every woman’s seat was pulled out for her and Spanish/English menus quickly followed.  The one thing that they had in common was that they were all very attractive, young men. 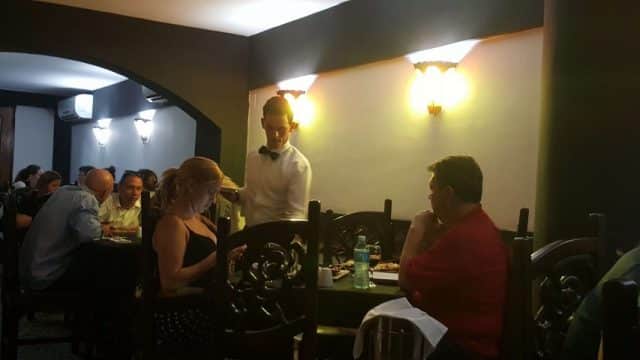 The overall experience was divine

The interior of the restaurant was very gorgeous.  All of the furniture was solidly crafted, custom made furniture.  The back of the chair featured carved roses.  As small as the venue was, we never felt cramped.

The waitstaff was well trained and they moved with melodic precision as they worked around each other making sure that each guest was well taken care of.  As soon as our order was placed, our server swiftly removed unnecessary items from our table and replaced it with the things that we would require when our meal arrived. 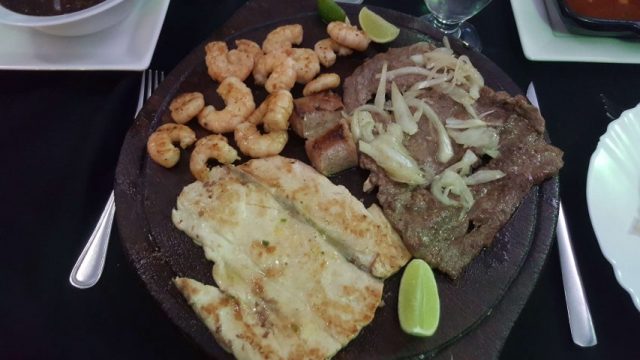 During our first visit, Carisa ordered the Mixed Grill which consisted of a delicious cut of a premium slice of beef with sauteed onions, grilled fish, chorizo, and shrimp.  Two side dishes came with her meal, she decided to order a bowl of black beans and mixed sauteed veggies.   Her meal cost $10.95 CUC. 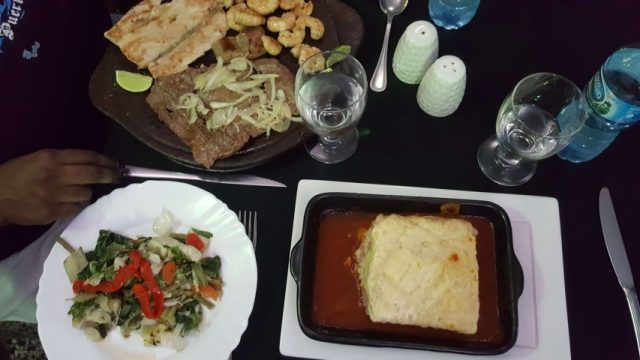 The food was tasty and generous

I wasn’t very hungry, so I decided to play it safe and order the Ham Lasagna for $3.85 CUC.  I was curious about ham in my dish because usually, it’s beef.  I’ve since learned that there is a shortage of beef in Cuba.  In fact, a tourist is more likely to get a taste of it before one of its citizens because it is cost prohibitive.

A steak will cost roughly $25.00 per kilo, which is totally out of the question for people who earn on average $20.00 per month.  I would have to assume that this paladar is limited in what they can offer as well, hence their substitution.

Nevertheless, I absolutely enjoyed my meal, but the serving was so large, I had to ask for a take-out box.  Both of us asked for boxes and we were charged 0.60 CUC for each box.

We decided to share our bounty because one, the food was delicious and two, there was absolutely too much of it!  Our server was attentive, but not to the point of our not being able to enjoy the experience.

On our second visit, I decided to order Garlic shrimp ($6.95 CUC) which came with two sides.  I, a former hater, of black beans – ordered black beans this time around because it was absolutely delicious the last time we were there.

Prior to this, I had never tasted black beans that didn’t make me want to retch.  However, I would gratefully pay the owners for this recipe!  Whatever you do, order it, you won’t regret it.  I completed my selection with the sauteed veggies which were slightly on the salty side, but still tasty. 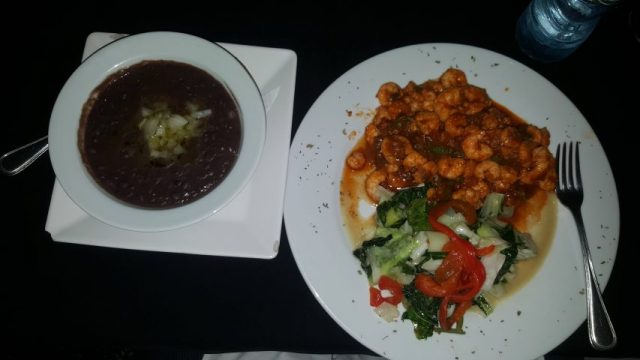 Carisa ordered a Pizza….my first thought was, “Meh”….but that was before I saw it.  It was a bit smaller than a large pizza that you would get at a Dominos, but it was virtually a platter of meats and it was scrumptious!

The crust of the La Rosa Negra pizza was crunchy and topped with sauce and cheese with bits of ham, sausage, tuna, shrimp, and bacon and cost $5.95 CUC.  Needless to say, she had to take half of it back to the apartment. 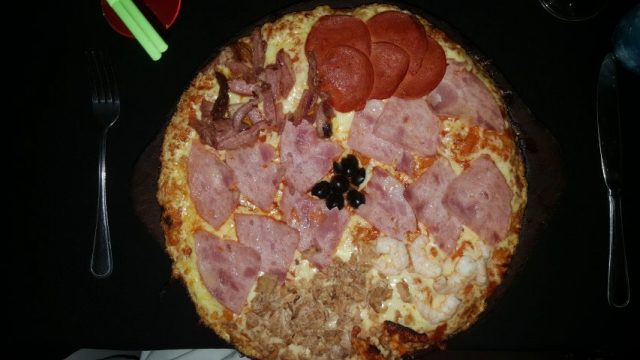 What the heck?  I decided to order my first Mojito ever, so it was quite appropriate that it would happen in Havana!!  It was so tasty and I’m usually a lightweight when it comes to alcohol, but I was only slightly buzzed.  My drink cost $3.95 CUC. 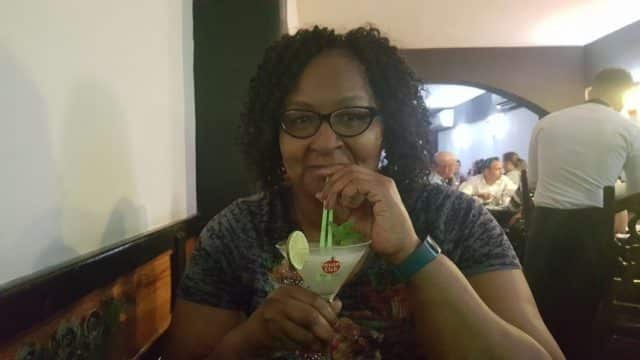 Of course, it was the night before leaving Havana, so we had to indulge in dessert.  Up to that point, we had very few sweets, so we were excited to order a slice of chocolate cake with a side serving of strawberry ice cream for $3.95 CUC. 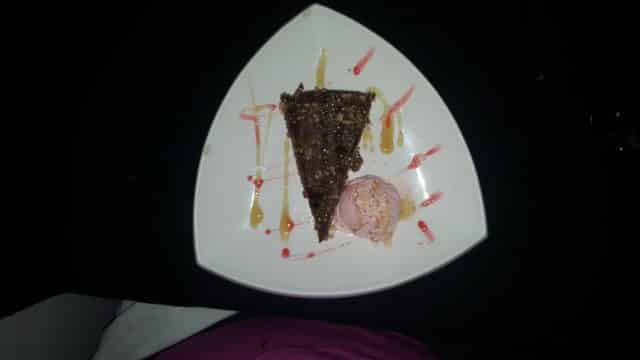 After paying our tab, our server gave each of us a beautiful rose and thanked us for coming. It was a lovely ending to a beautiful experience.  Please be sure to pay La Rosa Negra Restaurant a visit if you happen to find yourself in the Vedado neighborhood in Havana, Cuba!

Previous Post: « Top Ten Things to know about traveling to Cuba
Next Post: How To Edit Your Photos For Free Using Pixlr Express »