You are here: Home / City Views / The Seattle Gum Wall | THE END OF AN ERA?

I heard about the Seattle Gum Wall while doing some quick research on a city that I had longed to visit.  Quite frankly, my stomach did a somersault at the mere thought of it. The gum began appearing right outside the entrance of a little hole in the wall, the Market Theater.

Thanks to the creativity of patrons lining up for the next show, littering became viral.  The Theater is located right beneath the main entrance of the Pike Place Market, one of the must-sees of any first time visitor to Seattle.

As with all bad habits, the idea caught on. Over the course of twenty years, it began to mimic some version of abstract art. This colorful, gaping wound of three-dimensional graffiti soon took on a life of its own. 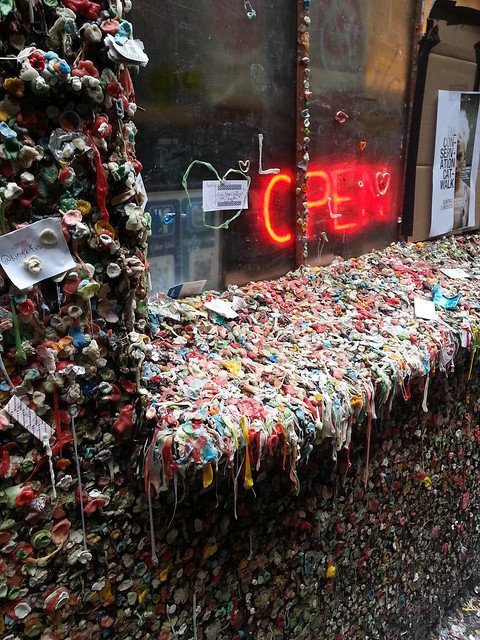 While the gum that dotted the wall exterior took center stage, the floor of the alleyway wasn’t left out in the cold. Some of the litterers were traditionalists.  They believed that the proper disposal of gum should remain firmly on the soles of another person’s shoe.

At some point, it was virtually impossible to see the brick facade. It became a lovely homage to the Wrigley’s Corporation.  Honestly, the Seattle Gum Wall could quite literally send a Forensic DNA analyst into anaphylactic shock. 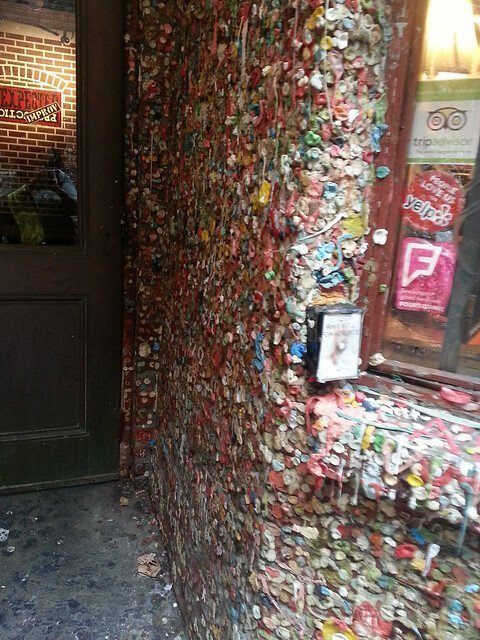 All good things must come to an end

City officials have estimated that all of the gum weighs 2,200 pounds. How could they possibly know, you ask? Only a mere 5 days ago (November 13, 2015) they decided to remove all of the gum. The company that was hired decided to use steam instead of pressure washing it because they wanted to preserve the brick as they cleaned.

Here’s a photo of the cleaning crew doing what they do best. They’ve promised to weigh each bucket of gum that they remove every day to get an accurate accounting of the weight. Something tells me that the city fathers and mothers will be paying for the Seattle Gum wall to be cleaned again in perhaps another twenty years. 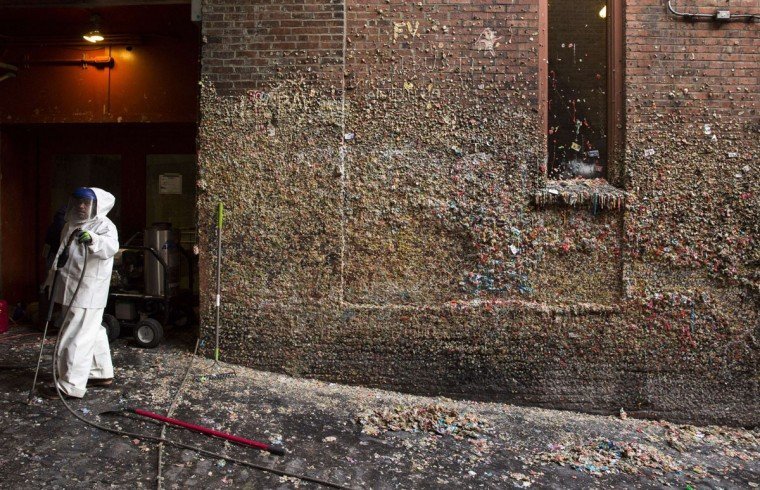 Previous Post: « Using Google Flights to search for the best fares [THE NEWBIE’S GUIDE]
Next Post: 48 Hours Discovering the Magical Parks of Utah »