You are here: Home / Europe / A Review of Megabus UK’S Overnight Accommodations

My honest review of Megabus UK

I’m always up for any alternatives to expensive airline or rail tickets. I’ve written in the past about other frugal travel options.  Today, I would like to give my review of Megabus UK.

Roughly six years ago, another company begins to make waves in the U.S. by offering newer, comfortable luxury buses with free wi-fi service (though not available on every bus) and a small but functional restroom in the rear.

What is Megabus UK?

For the longest time, their service was limited to the northeastern U.S., fortunately, they began to service the southeast by offering $1.00 introductory fares and the rest is history. Megabus USA is experiencing phenomenal success, much like its parent company in the UK which launched in 2003.


As I was planning my recent trip to Paris, I thought it would be nice to use Megabus UK to visit either London or Amsterdam while I was there. It was interesting, so I decided to write a review of Megabus UK for you, dear reader. We opted to go with Amsterdam since the trip time was considerably less (by two hours) as was the cost (by £8 each way).

Our fare for our trip to Amsterdam was a grand total of £20.50 roundtrip ( £10 per person plus a 50 pence booking fee which is charged for all reservations) and the trip time was a little over 7 hours. Since our departure time was at 11:30 pm this worked to our advantage since we would be able to sleep overnight and wake up refreshed in Amsterdam the next morning. 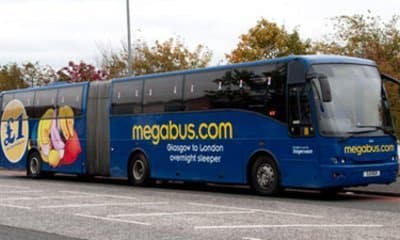 A little info about their Paris Bus stop

The Megabus station is located at the Porte Maillot Coach park which is right across the street from the Palais des Congrès de Paris on Boulevard Pershing. It is easily reached by Metro on line 1 (Direction La Defense).

Simply go up the stairs and exit right outside the metro station. The Palais des Congrès de Paris will be straight ahead and the coach park will be right beyond it.

It was late Fall and the weather was frighteningly cold when we got to the coach park. To our surprise, there was no waiting room so we had to stand outside for two and a half hours. There are no benches, so we decided to sit on the edge of the retaining walls that surrounded the park.

Our bus arrived around 10:30 pm though it wasn’t easy to tell that it was ours because there was no signage indicating its destination. I had to knock on the door and ask if that bus was scheduled for Amsterdam. The driver confirmed that it was but there would be no boarding until 11:00 pm.

The service wasn’t so great

Of course, I think if someone had a ticket and the weather was in the low 30’s it would make sense to let them board rather than allow them to stand outside in the cold to freeze. However, this guy wasn’t the friendliest and he seemed to turn everyone else away who had a similar idea as I did.

What made matters worse was that he thought it was more important to have a deep conversation with another Megabus driver that he didn’t come back to let us in until 11:15 pm! Had the weather not been so miserable, or his attitude so poor, it probably wouldn’t have irked me as much.

The seats are great if you’re short

We were the first to board, so we tried to find good seats while we could. The seats were as expected for a tour bus and had seat belts that we had to wear before the driver could or would pull off. I quickly learned that the pitch of the seats was pretty tight as my long thighs could attest, but anyone of average height would be comfortable.

Honestly, I could have taken one of the front seats and would have been fine, but given the driver’s behavior, I wasn’t trying to sit that close to him. This bus was a slightly elevated traditional coach bus and was not like the double-decker buses that I usually saw back in the states. The interior was clean and bright, there was overhead lighting and a spot check of the restroom was satisfactory. 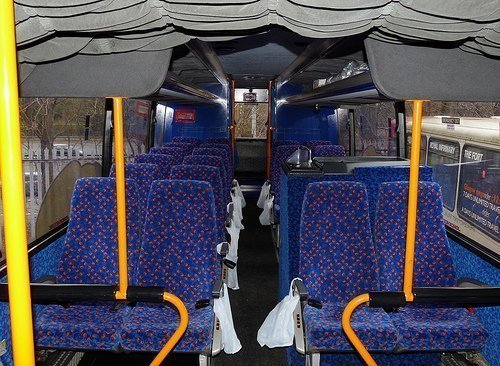 We pulled out around 11:45 pm and all in all, it was a smooth trip. I didn’t know it at the time but there was a stopover in Brussels, Belgium 4.5 hours into the journey and a slew of college kids disembarked. I made a mental note that if I ever did this again, this would be a great way to check out Bruges (which is high on my bucket list).

Yikes, this was inexcusable

I figured it was a great time to use the restroom since things were at a standstill and almost half of the passengers were gone. To my surprise, the toilet was full of urine….well, it was one urine sample short of being full.

The driver saw me quickly close the door and explained that they were out of water which is why it was impossible to flush the contents. I had one word for that, “EEEWWWWW!”. Thankfully, I could wait.

We arrived in Amsterdam almost three hours later and were instructed by the driver where we could catch the tram (#26) to get to the city center. The ride back was less dramatic, we still had a stopover in Brussels but we would also have another stop because the driver was scheduled to be replaced by another. We still arrived back in Paris 45 minutes before we were scheduled to.

Final Verdict of my review of Megabus UK? It’s budget traveling! We didn’t pay much and as to be expected you can’t expect too much. If you approach the entire process with the understanding that you won’t get four-star service, you will be fine.

The bus was extremely clean, with one exception that was mentioned earlier and the ride was uneventful and relatively quiet because everyone used the time to sleep as I did, no doubt.

The price was excellent and it proved to be a great way to take a day-trip with very little hassle. Would I do it again? Yes, I would…..with no hesitation. I would just go light on drinking liquids!

Previous Post: « The Top Five Things to Do in Amsterdam in 24 Hours
Next Post: The Global Entry Program [THE NEWBIE’S GUIDE] »