You are here: Home / Europe / The Top Five Things to Do in Amsterdam in 24 Hours

Short on time, here are five things to do in Amsterdam!!

The Amsterdam that I actually witnessed is the polar opposite. In fact, it struck me as being very family friendly, cultural, progressive, stylish and a historical bulwark of days gone by.

We’d decided that we wanted to take a day trip while we were in Paris. My motto is if I am going to cross an ocean, I’m going to make it worth my while.

So, what better way to maximize our experience than to visit a city that I had long wondered about after seeing so many beautiful pictures posted on various social media by my travel blogger friends. Maybe I should give the city a try despite the questionable reputation that preceded it?

The problem was that we would only have one day to experience the true ambiance of a city that held so much promise as I began to do my research.

So, I decided to set a challenge for the two of us (my daughter, Carisa and me); we would attempt to use that limited time to discover the top 5 things to do if you only had a day in Amsterdam. 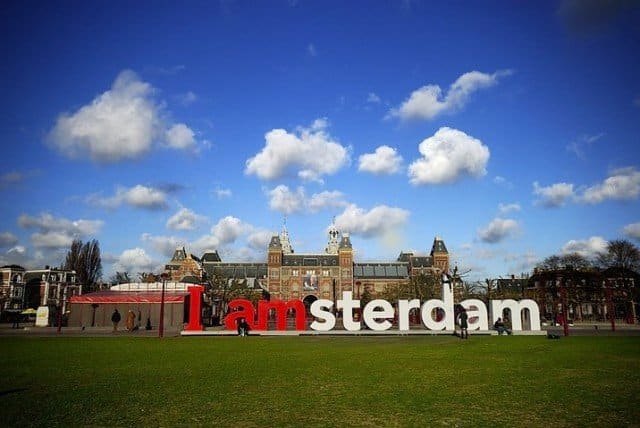 The best resource in helping us to meet that challenge was to contact the city’s Tourism Office. The number one thing to do is to purchase their 24-hour I amsterdam city card for 40 euros.

It truly is the most cost-effective and less taxing way to see as many of the famous, local museums, gardens and the local zoo.  Other activities can be experienced at 25% off the entrance fee.

The card is actually a mini-guidebook with tips from locals on must-sees, maps, a list of literally everything there is to do in the city when it comes to shops, restaurants, gardens, comedy clubs, night clubs, etc.

When you open the book, you will see a museum pass and a travel pass affixed to the inside cover. Carefully remove these two cards because the museum pass will allow you unlimited entry into all museums within the time specified.

Similarly, the travel pass will allow you unlimited passage on all of the local transportation systems like the Tram or the Metro Buses for the same 24 hours; the clock starts ticking as soon as you scan it. 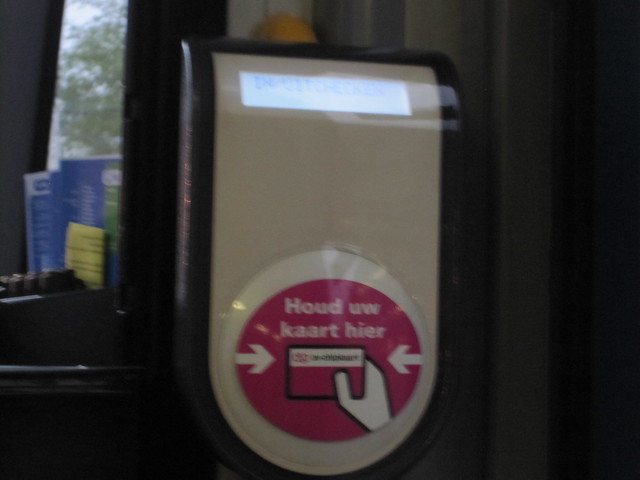 Be sure to wave your travel pass across this scanner when boarding AND exiting a bus or tram.

If you happen to have more time on your hands than we did, you can also purchase a 48-hour card for 50 euros or a 72-hour card for 60 euros. You can purchase your card from any of the six tourist offices, but I got mine from their VVV Service Center.  It is located right across from the Amsterdam Central Train station in the city center. We hopped the # 26 tram line that brought us to the city center from the bus depot where Megabus dropped us off earlier. 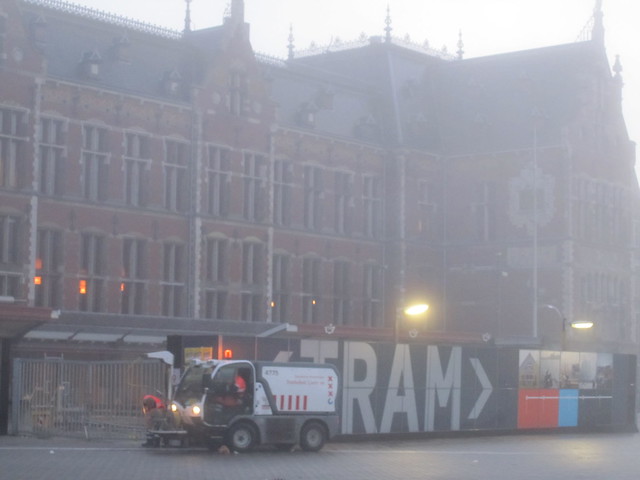 A Foggy, early morning view of the Amsterdam Central Train Station; the trams were located right in front and were easily accessible.

Here is my personal pick of the top five things that you should make sure that you do when you visit this very popular European city.

The Van Gogh Museum is currently undergoing renovations (will reopen May 1, 2013) so the bulk of their exhibition is being hosted at the Hermitage which can be reached from Central Station via Tram line 9 or 14 to Waterlooplein metro station and is located at 51, Amstel Street.

There is a 2.50 euro surcharge to see the “Vincent” exhibition, so be prepared for that. You will have the option to check out a self-directed audio tour. The audio tour is available in Dutch, French, Spanish, Italian and English and costs € 5.   No photography is allowed which wasn’t a big surprise given how tourists with their flash cams have wreaked havoc for the rest of us.

They will also expect you to check any bags before viewing the exhibition. For the past six months, The Hermitage has been hosting a retrospective on Impressionist Art and not only did we enjoy the painting and sketches of Van Gogh, but the masterpieces of Monet, Manet, Gaugin, Cezanne, Renoir, and Pissarro were a beautiful bonus. That exhibition ends on January 13, 2013. 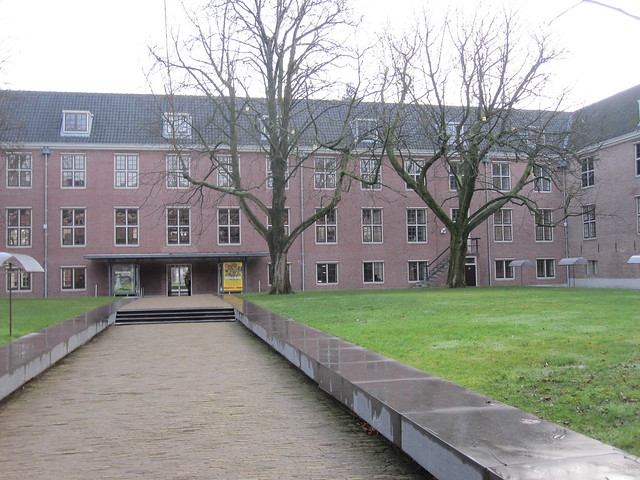 At first glance, you would mistake the Museum for a College campus. It has a stately countenance and is rather sizable.

2. Take a Canal Cruise with the Blue Boat Tour Company

This is really a no-brainer because you will get to see the city from a divine perspective that can be missed when taking a leisurely street stroll. The city will soon celebrate the 400th anniversary of the canal’s construction so I am sure there will be many festivities to honor one of the things that make this city so uniquely special.

Take the Tram 1, 2 or 5 to Leidseplein (I was hoping this was how the Metal band Led Zeppelin got its name….apparently that is not the case) Metro Station. You will board at Stadhouderskade 30, right across from The Hard Rock Cafe. The City card offered our cruise for free. 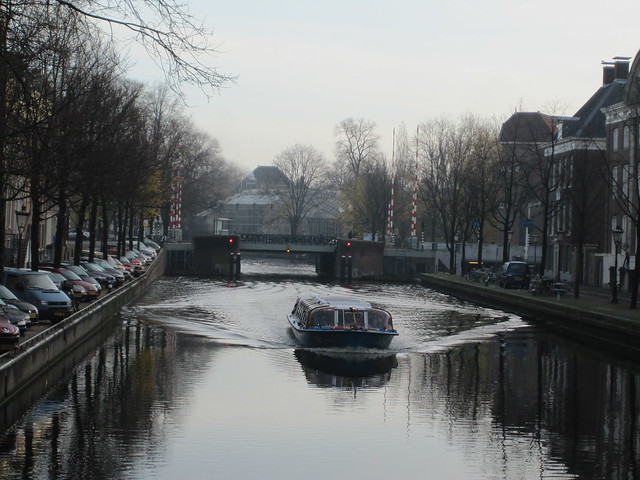 The clearance ahead was pretty low, but we made it through.

Apparently, I wasn’t paying attention in class because I didn’t remember that Amsterdam is where the Frank family hid from the Nazis during WWII.  They spent two years hiding in fear of being discovered by the SS forces which were occupying much of Europe during that time.

The lines are extremely long, but you can save time and avoid having to queue by buying tickets online for a reserved time for  € 9.50 per adult.  Note: They do not accept the I Amsterdam card. 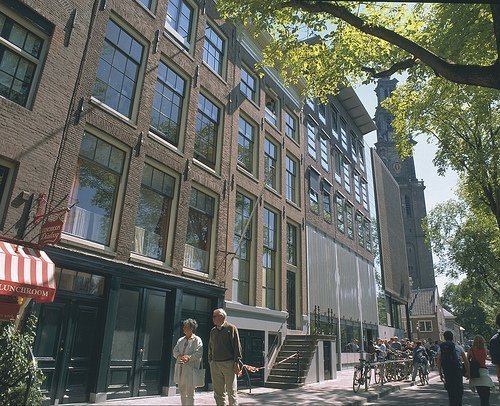 4. Get a birds’ eye view of the city by riding a bike!

It is estimated that there are more than 881,000 bicycles in the city of Amsterdam and about 780,000 residents.  Over half of the population chooses this mode of daily transportation over cars and public transportation.  Near the Amsterdam Central Station alone, there are over 7800 bike parking spaces.

My personal observation is that it is so easy to see why this is the case.  The city is one of the most bike-friendly locations that I’ve ever seen.  There is an extensive bike path network which makes it a safe mode of travel.

I saw many mothers biking with their wee ones in tow.  I think there are so many things that Urban America could learn from studying this system.  There are plenty of cars milling about, yet they seem to co-exist with bicycles and most certainly contributes to a more pollution free environment.

There are roughly 900 people injured in traffic accidents in Amsterdam every year and the vast majority are cyclists.  One could argue it’s because helmets aren’t required, but I will let you be the judge of that.  All in all, it is a great way to traverse the city and sightsee at your own pace.  Several bike rental shops offer 25% off with the I Amsterdam card. 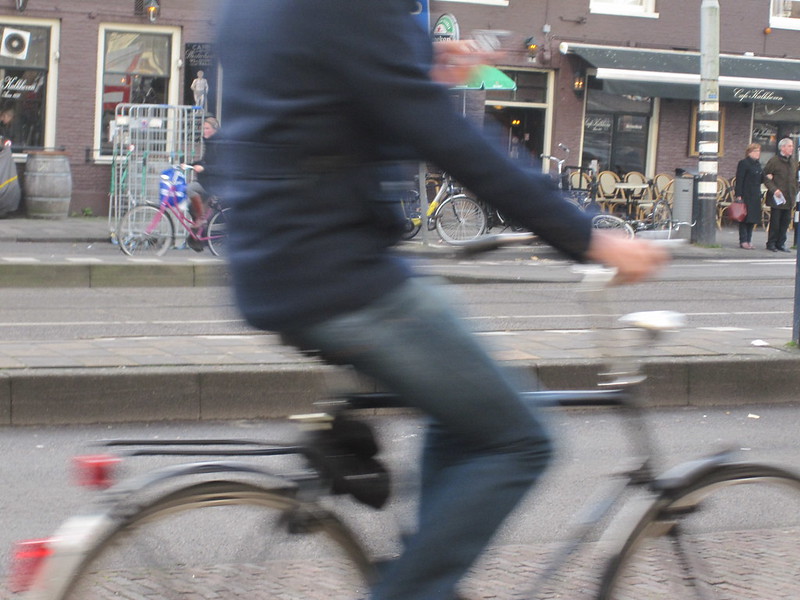 As soon as this one sped by, there was another right behind. Of course, that’s not surprising when there are more bikes than people.

5. Visit the FOAM Museum, A unique thing to do in Amsterdam

It is located at Keizersgracht 690 and can be reached by taking Trams 4, 16, 24 or 25.  This museum is dedicated to the art of Photography. One Photographer of note is exhibited for a period of several months.

We had the pleasure of viewing the works of the late Diane Arbus. This black and white collection was Ms. Arbus’ celebration and in fact, a challenge to that which most people would view as ugly, undesirable, and living outside the boundaries of good taste and propriety.

I saw her photographs as shocking and antithetical to what was usually put on display in museums. I thought that her subjects were brave to agree to be photographed in such a candid, raw manner but they not only agreed to it, but their faces also belie the fact that they enjoyed their new-found role in being the center of attention. 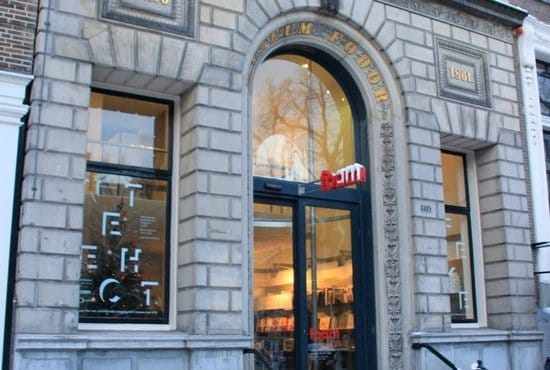 The Foam Museum curates a treasure trove of photographic works. 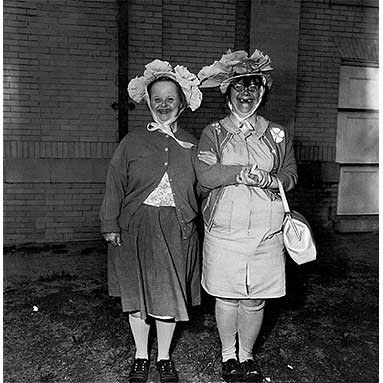 One of Diane Arbus’ flawless works.
“Everybody has that thing where they need to look one way but they come out looking another way and that’s what people observe. You see someone on the street and essentially what you notice about them is the flaw.” – Diane Arbus
Previous Post: « The Hotel Taylor and Hotel L’Annexe in Paris, France | A REVIEW OF TWO SISTERS
Next Post: A Review of Megabus UK’S Overnight Accommodations »