You are here: Home / Europe / The Hotel Taylor and Hotel L’Annexe in Paris, France | A REVIEW OF TWO SISTERS

There is nothing more comforting when you visit a city far away from home than knowing that your newer and more temporary digs offer you that same warmth and familiarity. I felt that way as soon as I found my way to the second and third hotels that we would be staying at in Paris, France. I wasn’t expecting anything out of the ordinary; a clean room with a comfortable bed are the limits to what I had hoped for.

Hotel Taylor would be the first of the twin or sister hotels that we would have the pleasure of staying during our last two days in Paris. The second was right next door, the Hotel L’Annexe. While they were both owned by the same couple, that is where the physical similarities ended.

Both hotels were immaculate and traditional, very much what you would expect from a European boutique hotel. They are modern in the sense that all conveniences were provided like television, a buffet breakfast (at an additional cost of 15 euros) and updated bathrooms. Plush and comfortable mattresses were juxtaposed with traditional, period furniture, which seemed to give guests the best of both worlds. 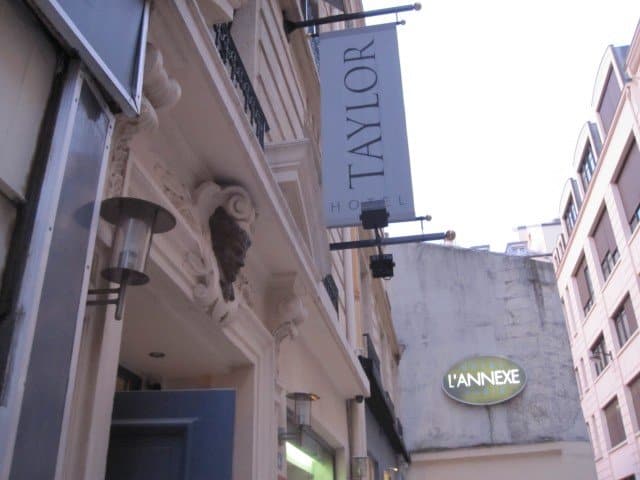 We did notice that the Hotel L’Annexe’s room was significantly smaller than the Hotel Taylor’s. That could work to an amorous couple’s advantage, so I won’t say that it was necessarily a bad thing. Luckily, my daughter, Carisa and I managed to make it work somehow because the bed was essentially a king which predominated the space.

The room was arranged where there were sufficient open closet space and the bathroom, which was literally the size of one of my closets at home (boy, we Americans are a spoiled lot!), actually worked!

The Hotel Taylor was perhaps my favorite. Its dimensions were larger than the typical European hotel room; the bed was the same size as L’Annexe’s, but there was enough room for a very large wardrobe and double windows, which allowed a pensive view through a Juliet styled balcony. The bathroom’s size was doubled and the requisite sample sized toiletries were made available to guests. Both hotels operate with a conscious commitment to green/sustainable living. 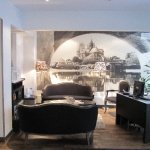 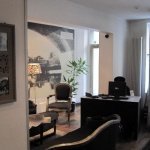 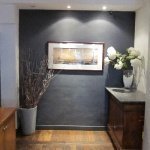 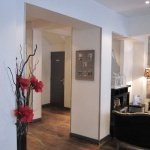 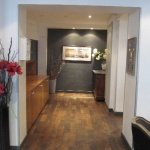 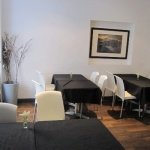 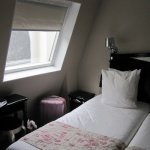 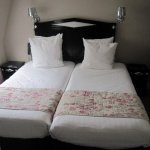 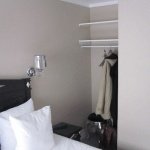 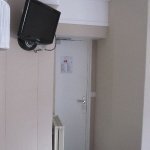 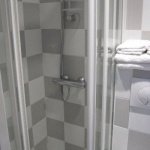 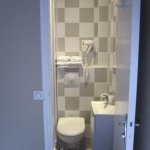 One of the nice things about both hotels is that they are located at the end of a pedestrian street. While it is very quiet, it is still within close proximity to the Post office, a myriad of restaurants, retail shops, and grocery stores. You are within two blocks walking distance of the Republique Metro station.

While we were there, the city was installing cobblestone right outside the hotels. It definitely requires the work of artisans as the stones were laid in a fluid and harmonious geometric pattern that stayed true to European style. 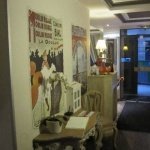 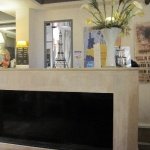 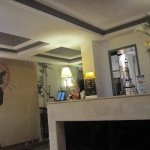 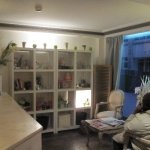 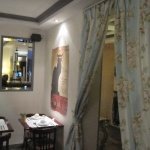 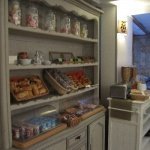 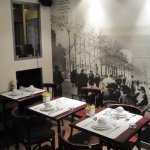 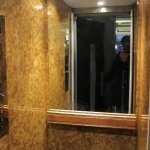 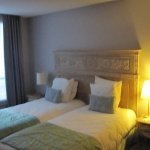 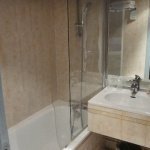 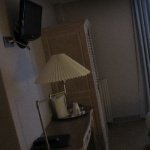 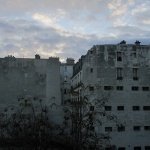 While both hotels were beyond satisfactory, none of the aforementioned accouterments were the best part of either hotel. The best and most enjoyable aspect was meeting the owners, Angel and Sylvie Sanguinetti. They are two of the most charming people that I have met in quite some time. They radiated warmth, were hospitable and more than that……are truly genuine. I meshed with them immediately.

They love what they do and it is obvious that they are in this industry purely for the love of it. They are people oriented and take great pride in what they have built here.  In a city full of competing hotels, they have managed to set themselves apart by instituting a system where their only purpose is in making their guests happy.

To witness this first hand in a world where there is very little hospitality in the hospitality industry was refreshing. I think the rest of the everyone else is on to them as well…..they seemed to have a respectable flow of customers coming and going as I observed and deservedly so.

We’d planned to take a day trip to Amsterdam two days before checking into the hotels. When asked if it would be ok to leave our luggage there so we wouldn’t have to go traipsing around Holland with it and they responded positively with no hesitation. When we returned to Paris, we arrived rather early……hours before the 12-noon check-in. We forgot to inform them that we would need an early check in but there was no worry. The attending desk clerk, Mafelda, had the housekeeping staff ready a room for us within minutes.

So, it appears that these people walk on water and absolutely nothing went wrong……right? Actually, there were two issues for me. They do offer free wi-fi for both hotels; you will have to get a username and password from the front desk.

However, it was more difficult to get a clear signal that would allow me to sign on at the Hotel L’Annexe so I wasn’t able to check in nor print out my boarding passes for my upcoming flights. So, how did another front desk clerk named Magda handle my ‘complaint’?

She took my flight info, logged onto the airline’s website, checked my seating and printed out my boarding passes. I was expecting my previously arranged airport pickup service at the same time but they were late. She called them and was told that they had no record of my booking.

She emphatically explained to them that THEY had called her the day before to confirm the booking!! She was very apologetic and asked if I would like her to call us a taxi or another shuttle service. We asked for a taxi and she arranged for one to pick us up in less than 10 minutes and we made our flight with no problem.

My last complaint…..the elevator lift is small. No surprise there, but still a complaint! lol If you are looking for a truly wonderful home away from home, don’t think twice. Call them and book!!

Disclosure: I was a guest of the Hotel Taylor and Hotel L’Annexe but the opinion of my experience there is my own.

Previous Post: « The Black Beauty Problem in Paris
Next Post: The Top Five Things to Do in Amsterdam in 24 Hours »