You are here: Home / Interviews / A Conversation with Gray Cargill of SoloFriendly.com

For the first time ever, I will be taking my first solo trip later this year.  My daughter has other obligations and will not be able to accompany me on this journey.  It will be a change for me since she has been my road partner all of these years.   One thing that became glaringly obvious in planning this trip is how the travel industry is set up to accommodate couples and groups.  Of course, this is something that you don’t notice when you are a part of said couple or group.  I know that there are plenty of folks who would love to travel but may be reticent to go it alone.

But I am up for the challenge and quite excited at the prospect of venturing out on my own!  Still, this is something new to me so I thought that I would contact someone who had a bit more knowledge about what I (and others in a similar situation) was in for.  Gray Cargill is an experienced solo travel blogger and would be the perfect person to discuss what, if anything, I should expect as a newly vetted solo traveler myself. 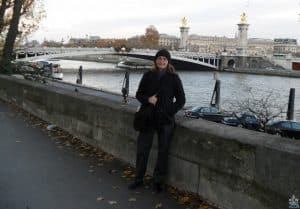 Standing near the Alexander bridge along the Seine in Paris

Ok, Gray, you’ve become quite an expert on traveling solo.  How did you get started?

I guess you could call me an expert by now, though I prefer the word “enthusiast.” I got started the same way many solo travelers get started–I wanted to travel, but none of my friends or family were in the same situation. Either they had no interest, no time, or no money. It was either don’t travel at all or travel alone. I decided to try traveling alone. As it turned out, I liked it. People often talk about going on vacation to “get away from it all,” but if you’re traveling with someone else, you’re not getting away from it all. You’re bringing some of it with you. Solo travel is really getting away from it all.

What is the most difficult aspect of traveling solo?  If you could, how would you resolve it?

The expense. Some call it the single supplement, though as an independent traveler, I’m not really dealing with single supplements per se. But I have no one to split the expense of a hotel room, no one to split cab fare, no one to split an entree in a restaurant. There are so many ways couples can split expenses to save money that solos can’t. To add insult to injury, a place like Las Vegas offers tons of coupons specifically targeting couples (“2-for-1″s), that aren’t usually good for 50% off if you’re traveling alone. How would I resolve it? More hotels (especially in the US!) need to build single rooms, designed for solo travelers. Restaurants should offer half-sized portions at half-price for small appetites. And coupons should always have that “50% off for solos” alternative. 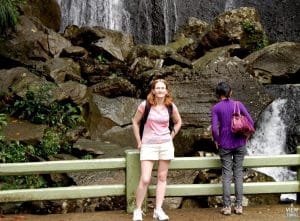 Gray enjoying one of my favorite things, Waterfalls! Striking a pose at Coca Falls in Puerto Rico

I went on a two-night cruise (press trip) last summer on the Norwegian Epic, which has over 100 staterooms for solo travelers, which is one of the most exciting innovations in the travel industry that I’ve seen. Before that, I had never set foot on a cruise ship because the single supplements were so prohibitive. Even if I could afford it, I tend to avoid travel situations that charge single supplements on principle. It’s not right that a solo traveler should be penalized financially for not having a travel companion.

Do you encounter cultural issues or expectations during your travels that men traveling solo may not experience? If so, what are they?

The thing women generally have to deal with that men don’t is sexual harrassment. Although personally, I have had almost entirely positive experiences as a solo female traveler. Then again, I’m not a cute young 20-something any more, so I don’t have to deal with it as much as they do. (One of the blessings of growing older!)  I also have never traveled to cultures where the role of women is severely restricted, so I’ve never had to deal with that. That’s been a purposeful choice on my part. I don’t have a poker face, so I don’t think I could hide my annoyance with those kinds of attitudes toward women. I wouldn’t be very popular with the locals.

Can you think of any destination that was tailor-made for Solo Female travel?  If so, where?

So many. For women who are really, really afraid to travel alone, I’d suggest starting with Disney World. Seriously, how much safer can you get? And it’s not all about rides. You can relax by the pool, get a massage, see a show, and eat in some terrific restaurants there. Vegas has also been terrific for me. If you’re into spa resorts, I’d have to say that would be tailor-made for a solo female traveler, too. But if you really want to see more of the world, I think most cities in the Western hemisphere that have cultural offerings are wonderful–London, Paris, Montreal, Chicago, New York, etc. And people in these cities really don’t bat an eye at a woman traveling alone. It’s normal. 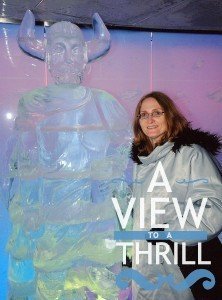 At the ice bar aboard the new cruise liner, the Norwegian Epic

What words of encouragement can you offer women who want to travel but find it difficult to find a willing partner?

Life is short. If there’s a place you want to travel to, don’t wait for someone else to come along to go with you.  Just go. You might be lonely at times, but not all of the time. There are so many ways to meet other people when you’re traveling, from just smiling and starting a conversation with someone, to staying in hostels where you’ll met other travelers, to joining day tours, to meeting up with locals via Couchsurfing. Just don’t fill up all of your time with new friends and acquaintance. Because there’s a certain joy in experiencing things alone, an indulgence in being able to spend as much or as little time on something as you want to, without having to worry about the wishes of a companion. (How often in any woman’s life does she get to focus on just herneeds? Cherish it!)  If you go solo, you’ll come home feeling so proud of yourself for doing it. It’s a real confidence-builder.

Do you think some of the difficulty in getting women to travel solo comes from societal pressures for women to be 1/2 of a couple?  There are many women who are hesitant to eat in a restaurant by themselves, much less travel.

You know what? I don’t think it’s just women who are pressured to be half of a couple. I think men are, too. I’ve had conversations with men who won’t travel solo. Some are worried about safety or are afraid they’ll be lonely. They’re afraid people will stare at them and pity them if they eat in a restaurant alone–the same fears that women have! But sure, women actually do face more of an expectation to be “wives and mothers” by a certain age and they may think by traveling alone, they’re opening themselves up to judgment for not being half of a couple.

I actually find that I’m more comfortable traveling alone than I am going out to dinner alone at home, because on the road, nobody knows my backstory. For all they know, I have a significant other at home who maybe can’t or won’t travel for some reason. Or maybe I’m traveling on business. Or maybe I am traveling with a companion, but s/he is doing something else at the moment. But if I go out to eat alone at home all the time, and the same people keep seeing me alone, it’s pretty obvious I’m not half of a couple. Then there’s more judgment. Not that we should care what other people think. But there’s a real freedom in traveling to a place where nobody knows anything about your life.

Give us some background about your travel websites, Solo Friendly and Vegas Solo.  Why and how did you get started?

I started SoloFriendly after the breakup of a very bad relationship. It was one of those relationships where I gave up almost everything that made me happy for him. I really didn’t even recognize who I’d become when I was with him, but it wasn’t me. So when we broke up, I really wanted to focus on the things that made me happy again: Travel and writing. (And junk food. I admit, there was junk food.) People had been telling me for years that I was “so brave” for traveling alone and that they didn’t think they could ever do that, which never failed to surprise me, since I am anything but brave.

So it seemed to me there was an untapped need out there for people to hear more about what solo travel is really like. Most people’s perceptions of it aren’t all that close to reality. Vegas is one of my favorite vacation destinations, so it seemed only natural that eventually, I would branch out and create a Vegas website too. The Vegas Solo was intended to help people plan their first solo trip to Vegas, but I’ve had people tell me they think it’s very useful for anyone planning a trip to Vegas, which is fine by me. I enjoy sharing the Vegas love with anyone who’s interested.

Gray, There is always a game-changer that allows us to re-evaluate our lives and it seems like you’re no exception.  Thanks so much for sharing your story and your obvious love for solo traveling.  For more insight into traveling solo, please check out her blogs and follow her on twitter and Facebook. 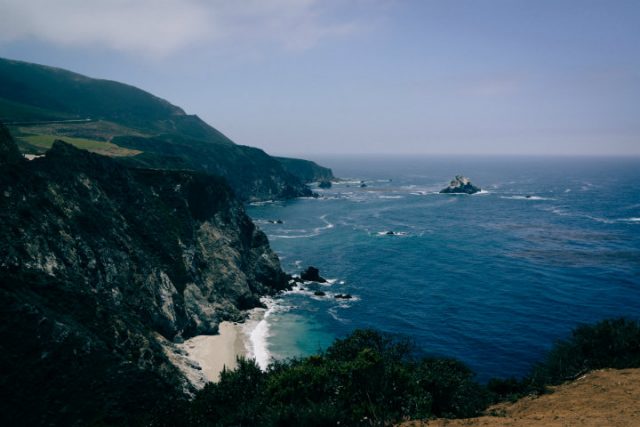 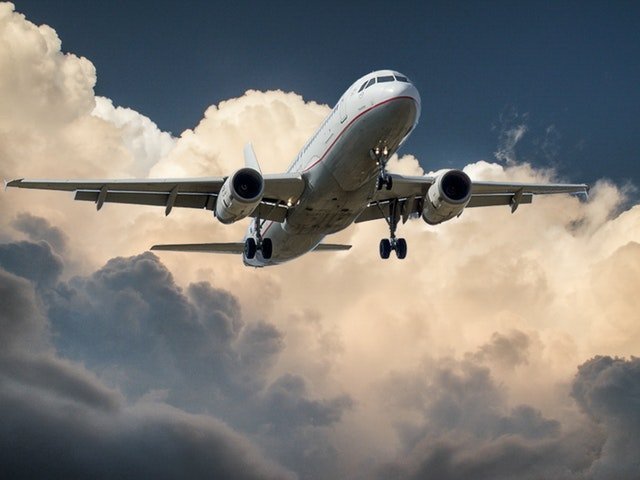 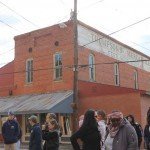 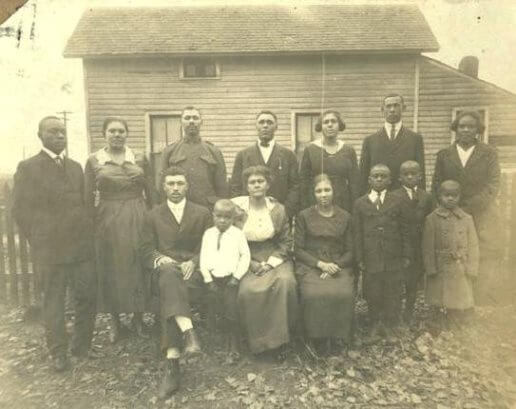