You are here: Home / Europe / The Most Conspicuous Escape From The UK…..Ever!

Today, A View To A Thrill welcomes our second guest poster, Craig “Crash” Williams.  We met when he posted a comment on my article, Sailing the high seas on a…..freighter, which detailed the growing freight cruise industry.  Well, it’s one thing to write about it, but another to actually experience it.  I knew that he was planning his own voyage with his lovely wife, Shelley and was journaling the experience on his own website.  Now that his voyage has come to an end (or at least I think so), he has agreed to share his experience with the rest of us.  As you read his personal account, you will learn that he firmly believes in traveling on his own terms.  Hopefully, this will give someone much-needed insight if they were contemplating doing the same one day.

During a cold, wet November day, my wife and I boarded the Grande Francia – an RORO (Roll On Roll Off) Cargo Ship, part of the Grimaldi shipping group. For us, this was the culmination of several months planning, during which time we’d sold our house in London, bought another which we then rented out, all whilst finishing our jobs.  Jobs we’d held for ten plus years!

Many of our friends and family questioned us as to why we would take a Cargo Ship from London, through Africa, down past Brazil before finally arriving at our destination, Buenos Aires!  All we could tell them was that it was for the total adventure of sailing the open seas, not on a cruise ship but aboard a fully working Cargo Ship, one with very few passengers, no entertainment and no sign of any organised tours in any of the ports we docked at.  ‘Sounds fantastic’ they all chorused, ‘the pair of you must be crazy…’ 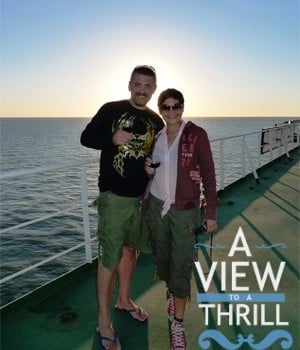 However, when it comes to looking back at the things you’ve done, a fourteen-hour flight somewhere is hardly front of the queue for stories!  The ship itself is one of the largest container ships in the World measuring over 200 metres long by 32 metres wide; it’s also thirteen stories high with our cabin being on the twelfth! Until you’re actually stood alongside a Cargo Ship, you cannot comprehend how big these ships are – massive – and with a sense of awe, we boarded via the very busy ramp at the Stern, introducing ourselves to the duty officer whilst being careful not to be hit by the many vehicles loading and unloading.  We were taken aboard and shown to the lift. 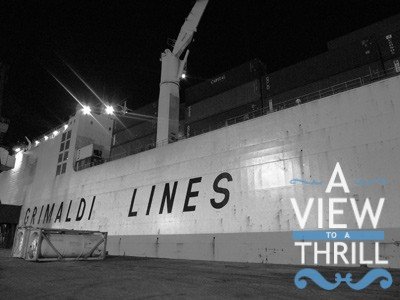 Grande Francia at night was a sight to behold

The inside of the Ship is cavernous – it’s at least 2 football pitches long and was a hive of activity – crew, wearing hi-viz jackets busily working around large agricultural plant destined for far-flung shores, huge pieces of engineering plant; engines, cranes, parts of structures with vehicles everywhere – it was very apparent that this was a fully working ship and we were the Ship’s Guests. 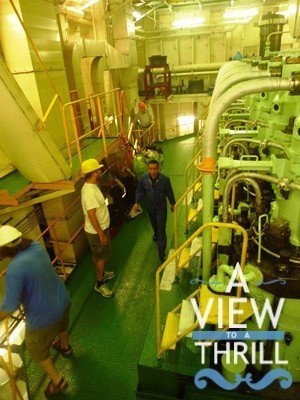 Inside the engine room 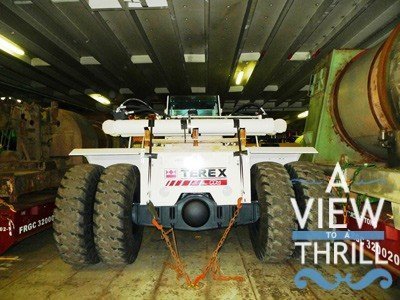 Inside the cargo hold 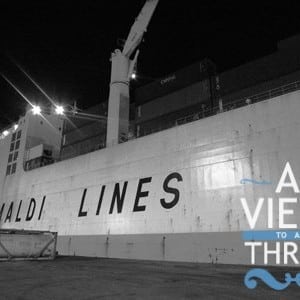 Given we were aboard for a minimum of thirty-two days, we booked the best cabin on the ship; The Owners Cabin; with our neighbour on one side being the Master (Captain) and t’other neighbour being the First Officer – we were travelling in style, we had two sea facing portholes and a bath, luxury.  As mentioned, our expected journey time was to be for 32 days though we were told it could go a week, either way, depending on the ship’s schedule, whether it missed out a port, stayed longer due to more cargo or indeed, making a detour to a different port for a ‘pick-up’ – for the next 32 days our lives were in the hands of the Ship… 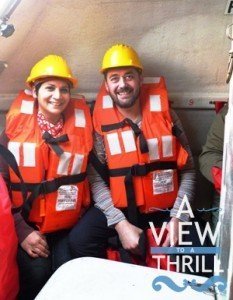 Our itinerary was as follows: Antwerp in Belgium, Le Havre in France, Dakar in Senegal, Conakry in Guinea, Freetown in Sierra Leone, Vitoria, Rio de Janeiro, Santos in Brazil, Montevideo in Uruguay, Zarate in Argentina before disembarking in Buenos Aires, from where the Grande Francia departed on her return leg.  In each place, we had the opportunity to go ashore, though we were warned:   ‘…the Ship waits for no man…’
We had some excellent nights ashore in places we wouldn’t ordinarily see – nights out in Dakar will live long in our memories as will the nights out we had in Santos and Rio. We had afternoons off in some great Cities and the beauty of the ship was that you could arrive at any time of the day or night, you never ever knew or could, the second guess.   In one instance we sat off the coast of Rio de Janerio for twelve hours – Rio was in front of us like a mirage yet we were mere spectators, desperate to get ashore and finally when ashore, it’s all the sweeter and memorable. 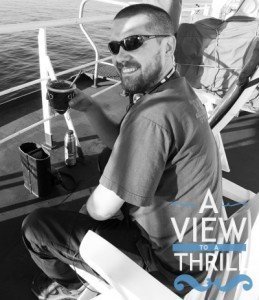 Life on board passes slowly though it’s surprising how quickly you settle into the Ships Routine; breakfast at 07:30, lunch at 11:00 with dinner at 18:00. The food being excellent – we had an Italian Chef, Sicilian by birth – he prepared his own fresh pasta each day. One of the joys of this type of travel is that he was more than happy for me to spend a couple hours in the kitchen watching / helping whilst he prepared his pasta, it was a real honour and I felt particularly proud that the Crew and my fellow Passengers were eating the pasta we’d prepared several hours earlier.  Between meals your time is yours.
There’s a small but adequate gym, foosball and table tennis are pretty much all the activities the ship provides though to be fair the reason for being aboard a Cargo Ship is to enjoy the open seas, so all the Passengers would congregate on the upper deck, reading books, chatting, tuning into World Service via a short-wave radio – there is absolutely nothing to do and it’s truly blissful.
We saw many Whales along with Hammerhead Sharks, Turtles, Seals off the Canary Islands, Dolphins – at one stage in the middle of the ocean there were at least three hundred plus Dolphins frolicking off the starboard side of the ship, truly magical and breathtakingly beautiful.  Looking back at the time we spent aboard the Grande Francia, is without doubt one of the best things we’ve ever done; being in the middle of the Ocean at midnight, the sky is stunning – so many stars looking down at you; crossing the equator and sharing a wee dram of single malt whiskey with my wife, whilst pouring a drop overboard for Neptune! Partying with the Filipino Crew whilst in the middle of the Ocean; being invited to see the Bridge; going beneath the deck to see the Engine Room; seeing the various decks and the cargo being carried – if you ever get the chance I recommend you explore the opportunity of travelling via a Cargo Ship. 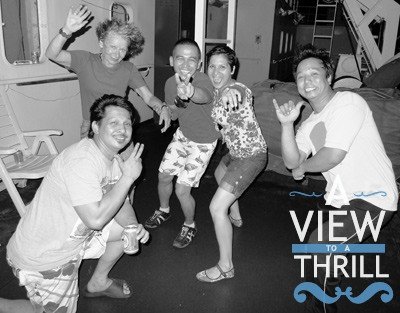 Partying with the crew!

We’re going to be in South America for a further four or so months and we’re already thinking about taking another voyage, this time across the Pacific, from Central America to Asia.  A journey of 28 days, give or take a week or two…
—————————————————
Craig Williams is a former Royal Marine whose been living in London since 1997, working within the Recruitment and Staffing industry. Recently turned forty, chucked his job in and along with his wife Shelley, took a Cargo Ship to Buenos Aires and is currently living in said City…  Check out his website where he journals their adventures at http://crashwilliams.wordpress.com/.
Previous Post: « Eight Of The Best Free Apps That Will Make Traveling a Breeze!
Next Post: Beware Of The Romans | Travel Photo Thursday »