You are here: Home / Africa / Traveling in Tunisia – Guest Writer

Today, A View To A Thrill welcomes a new friend and fellow world-traveler, Sheridan Lucas, as a guest writer.  She will share her impressions of her splendid visit to the country of Tunisia in Northern Africa.  Sheridan is an aspiring writer who is always looking for fun-loving travel companions to roam the world with.  If you enjoy adventure travel and would like to do some trekking, cycling, kayaking and/or walking tours please contact her at hot mail dot com. 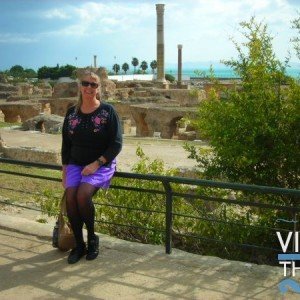 “I was a navy brat who made my first cross-country trip when I was two weeks old, in a cardboard box on the seat of my parents’ car.   I think that imprinted me for travel, like a baby duck, and I’ve been going ever since.  When I was 20,  I went to Europe and hitch-hiked around for 8 months, then resumed my education.   After graduation from Berkeley in 1975 ( during which time I worked as a proofreader and editorial assistant),  I moved to Oregon, got married, built a house and now manage my personal timber stand in the country, outside of Portland.

I participate in a lot of sports and have cycled from Canada to San Francisco,  in the Caribbean, and in various European countries.   I also trekked for two weeks in the Andes and eventually, I want to do more.   My favorite countries so far are Turkey,  Morocco andPeru.   I enjoy active travel and especially like to see folklore or dance festivals that involve local costumes, fabrics, and handwork.   I also like to interact with the locals, like the time when I rode the third class bus with a pig on the roof and the chickens inside, in Guatemala.  That is where you gain the most authentic and interesting experiences.   I would say that I am inquisitive and intrepid.   The only way we’re going to have peace in this world is by really getting to know each other.  Some other interests- and I have many- are theater, dancing, music,  singing and reading.”

On Oct. 15, 2009, I set out from Portland to fly to Paris, and then on to Tunisia.   Nobody wanted to go with me  ( most people didn’t even know where it was), the most common questions to me being “Where?” and “Why?”.   When Vantage Travel dropped the single supplement, I decided to give myself a nice 60th birthday present, since my birthday is on Oct. 20th.

I didn’t know what to expect either.   I’ve been to Turkey and Morocco, but Tunisia is different from them.   I would like to say that it is a progressive country where medrazas and extremists aren’t tolerated.   Women and children now have equal rights with men, and they’ve never started a war with anyone.   Furthermore,  since so few Americans have been there as tourists, they thought I was English.   Once corrected, they said, ” Welcome to our country, we are glad that you are here.”

How refreshing is that?   The other surprise was the excellent wine produced in the country,  a benefit from the French colonial days.   My other lasting impression was of the monumental architecture.   The government buildings and hotels are HUGE!   We started at the Sheraton in Tunis, a beautiful property with gardens and indoor and outdoor pools.   It sits on about the only hill in urban Tunis, with a view of the two salt lakes around the city.  From there, we ventured to the Bardo Museum, with the BEST collection of Roman mosaics in the world ( over 1000 have been transported there.

It is amazing that their color is still so fresh after all these years).   We then walked through the Medina, where we saw caftans and cherchis- the maroon felt hat, being made.   I regret that I didn’t buy one then because I couldn’t find them for sale elsewhere.  I would have happily worn one as a pillbox hat, with western clothing.  The Souk is a UNESCO heritage site, but I have been so spoiled by Istanbul’s.  It was nice, but much smaller, albeit more local and authentic.

A visit to Carthage the next day was a small disappointment because there aren’t that many ruins extant there, but it has a great view of the sea and you can let your imagination run wild.  In the afternoon, we attended a touching ceremony at the American Military Cemetery, which is beautifully kept up and a very peaceful place.   There was a huge modern mosaic of the North African war theater which was made by an elderly American war veteran.   It was extremely impressive and very informative.

On the way back to Tunis, we stopped at a very well preserved and engineered water, well,  storage and aqueduct system which used to supply Roman Tunis with water from the mountains.  The next day made up for Carthage.   We went to Dougga, which I had never heard of.   It was a breathtakingly beautiful Roman city on a hill, with well-preserved mosaics, temples, theaters and amphitheater.

It was olive, pomegranate and date harvesting time in Tunisia and the trees added to the beauty of the place.   On our way to and from Dougga, we passed many donkey carts and roadside stands laden with fresh fruit for sale which added much color to the sights, as well as all the presidential election flags and banners displayed.   Surprisingly, we had lunch at a country inn where wild boar was served.   They are very politically moderate Muslims.

The next day, we started heading for the Sahara, moving from lush green hills ( there is a rainy season in Tunisia, which we luckily avoided after the first day) to drier and flatter land.  We went through various Saharan oasis towns and saw more Roman ruins.  In Tozeur, we visited one of my favorite places,  a folk museum with many displays of regional dress and home furnishings.  This town is famous for its raised brickwork, and many buildings featured elaborate sand-colored designs.

The next morning, we were supposed to ride the Red Lizard train, but the weeks’  previous flooding had washed out some of the tracks,  so we opted for a bone-crunching four- wheel drives into the Sahara where we got to see the outdoor set of the bar scene from “Star Wars”.   The desert climate has kept it perfectly preserved.   We also visited three oases on the Algerian border, one of them being my favorite spot in the country because it had a waterfall and beautiful green ponds.  What an incredible place to live!   Later in the afternoon, we rode by horse-drawn carriage to observe the date harvest up close.   We later walked to a scenic gorge, where scenes from ” The English Patient” were filmed.   Some people were ahead of the game in discovering Tunisia!

The next day, we struck out for Douz, crossing the Great Dry Salt Lake with its mirages and salt crystals.   I imagine that many ” desert roses” are mined here.   The miners dig down 3 or 4 feet to unearth the rose-shaped formations, which people display as decorations in the yard and home.  At the end of the day, we went to another small, but nice, museum with a display of strictly Bedouin items.  We also went to the Saharan Zoo, with its coke-drinking camel and desert foxes ( small with huge ears-adorable a national symbol seen in sculpture everywhere) among other things.  That night, we had a sunset camel ride over the Saharan dunes.   I LOVED it!   The ride was surprisingly smooth and comfortable.   I would love to do a camel caravan adventure, which is possible.

The next day, we motored through the Berber regions and saw some cavernous homes, which reminded me of Turkey.  As we headed toward the ocean again, we saw several square miles of olive groves, some as big and ancient as the ones in Greece.   The stamp of Roman civilization is all over the country.  Also, the oldest synagogue and the oldest mosque in Africa are in Tunisia, although it was a Christian country before it became a Muslim nation.

We went over an old Roman causeway to the island of Djerba, a resort area with huge hotels and rugs and pottery for sale.  The next day, we took the ferry out of Djerba and started heading toward Tunis.   We did stop at El Jem, another incredible and impressive Roman amphitheater which was very well-preserved, much better than the one in Rome. Tunisia is an archeologist’s dream.   We also passed through the beautiful seaside resort of Monastir, Ribat with its fortified monastery and the Bourguiba Mausoleum, the resting place of the former president, who has an almost cult-like status today.

That night, we had a home-hosted dinner, where the wife ( an excellent cook) was a former Olympic track star and a famous national figure.   It was nice to be in a family home and observe everything.  Once again, I think mis- or pre-conceptions of the country and its people were broken down, with a positive result.   Tunisia is a voice of reason between two volatile countries, Libya and Algeria.  It behooves us as a nation to support tourism there, to increase our friendships and knowledge of each other.   I encourage you to consider a visit there.   If you love history and folklore as I do, you won’t regret it. 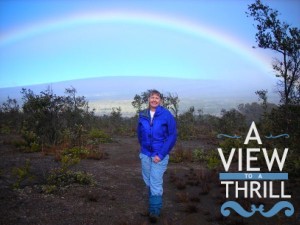 Sheridan, smiling somewhere under a rainbow, on the Big Island, Hawaii – April 2009

Previous Post: « Eight Sure-Fire Ways To Stretch Your Housing Dollars Now!
Next Post: Military Surplus is a Cheap Resource for Backpackers and Campers »